“Separating bran from flour is a luxury and is more harmful than beneficial for nutrition.” (Justus Liebig. “Letters on Chemistry”)

An emergency occurred in one of the military units of the tsarist army – all the officers of the unit fell ill. At the same time, the soldiers, on the contrary, felt great. In order to figure out what the matter is, a special commission was created. And after a long and thorough investigation, one peculiarity emerged – bread for officers was baked from high-grade flour, and for soldiers – from wholemeal flour, with bran.

So what’s the deal? Bran has always been perceived as a waste of flour-grinding production … It would seem that bread is made of better quality, purified from all excess flour and should be of the highest quality, because for a long time all the efforts of the baker’s masters were reduced to making bread “even more luxurious and whiter.” But no – the studies that have been carried out in this area have shown that “tasty and beautiful” does not always mean “healthy”. Therefore, we will try to figure out what bran is and why refined products are useless and sometimes harmful.

But first, we will go a little deeper into biology, just to have an idea of ​​what bran is. Everything

we know what a grain of wheat looks like. It consists of three parts, three main elements: the embryo is a small vitamin bomb capable of giving impetus to the development of a new life; the core, which contains sugars and starch – the nutrients of the future plant; the outer shell, the “skin” of the grain, which protects it from shocks, temperature fluctuations, moisture and other troubles from the outside.

The wheat germ is the first to give life to the plant, for this it contains enormous biological energy, a powerful force that makes the grain germinate in one day. Therefore, it contains the most important vitamins of group B and E and trace elements. The coarse shell of the grain, its walls, also contain valuable substances such as cellulose, lignin (insoluble fibers), pectins (soluble fibers). But the only part of the grain that goes into the production of white flour is the endosperm (core of the grain) – a supply of protein, sugar and starch, therefore, during the milling process, the grain loses a significant part of its nutrients. The finer the grinding and “cooler” grain processing, the less vitamins remain in the flour … Scientists have even meticulously calculated how many nutrients and vitamins a grain of wheat loses as a result of fine grinding: vitamin B1 – 86%, vitamin B2 – 70%, vitamin B3 – 80%, vitamin B6 – 60%, folic acid – 70%, iron – 84%, calcium – 50%, phosphorus – 78%, copper – 75%, magnesium – 72%, manganese – 71%, zinc – 71%, chromium – 87%, fiber – 68% … Depressing numbers. Now

it becomes clear why the officers of the military unit, which were discussed above, fell ill, because they got tasty and expensive bread on the table, purified from all impurities, and at the same time from all useful substances.

So useless bran is healthy? Scientists have long found out that the shell of the grain contains a huge amount of vitamin B6 (“the vitamin of calm” – receiving it in sufficient quantities, a person becomes calm and balanced, completely transforming), there is vitamin B12, gluic acid (a vitamin-like substance on which the proper functioning of nervous system, especially when it is overloaded), riboflavin (an organic substance also necessary for the central nervous system), thiamin (vitamin B1, the most important vitamin found in bran). In addition, bran contains vitamin E (providing the function of reproduction of offspring) and vitamin C (everyone knows ascorbic acid, the benefits of which are already indecent to remind), however, there is not very much of it there. Bran bread contains more vitamins than regular black bread. Vitamin B1 is contained in it in its best form – “thiamine”, it contains vitamin D, vitamin PP (niacin, which is essential for the nervous system, the proper functioning of the liver and blood vessels), lipominic acid or lopomin (in other words, vitamin H serving as an energetic “corrector”, as well as the most important factor for the functioning of the liver and heart). And most importantly, all vitamins contained in whole grains differ from pharmacy vitamins in that it is impossible to “overeat” or overdose them, since the excess will be removed by the body itself.

It turns out that by throwing away or giving away “unnecessary” bran for cattle feed, we throw away natural vitamins and microelements together with them. Somehow it turns out wrong …

Many studies support the use of bran bread. For example, it has been noticed that eating bran bread suppresses appetite, causing a feeling of satiety, has a beneficial effect on the intestinal microflora, and normalizes the digestion process. The bran contained in bread absorbs harmful substances and toxins, facilitating their natural elimination from the body. Bran bread improves immunity, and also increases the iron content in our body – only 15 grams. bran cover the daily requirement for this essential element for hematopoiesis. Bread made from wholemeal flour containing bran is recommended for people suffering from diseases of the gastrointestinal tract and cardiovascular system. Bran bread must be present in the diet of people suffering from overweight and obesity, as well as in dietary nutrition with restriction of carbohydrate intake. Bran bread has cleansing properties, so it should be consumed by people suffering from kidney and liver diseases and acute rheumatism. 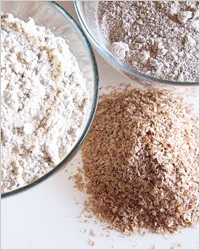 But, perhaps, the main advantage of bran is the high content of dietary fiber, which regulates the intestines, improves the microflora of the colon, lowers blood sugar and helps to eliminate excess “bad” cholesterol. Dietary fibers lower cholesterol by binding intestinal bile acids, which have atherogenic activity, so bran bread is simply necessary for the prevention of atherosclerosis. Bran bread is also useful for diabetes mellitus – it slows down the breakdown of starch and helps to lower the glycemic index of other foods. And recent studies have revealed a new property of bran – they effectively regulate metabolism. Fiber does not know how to “burn” fat, but it affects the very cause of excess weight – a violation of metabolic processes in the body. Bread baked from wholemeal flour is useful for cancer patients, especially those who have a tumor in the chest or fibrocystic breast disease. Bran is zinc, and this element is essential for knowledge workers.

The most useful and best bread is considered to be the one baked from flour baked from sprouted grain (malt), the so-called malt bread – the content of vitamin E in the sprouted grains of wheat increases hundreds of times, the amount of B vitamins increases 6 times, the concentration of necessary our body of trace elements.

Interestingly, refined “white” products (white bread, premium pasta, sugar) not only do not contain vitamins, but also consume their already small reserves – all in order to assimilate the “white poison” and “sweet poison” … White bread made from high-grade flour, confectionery, baked goods and sugar increase the body’s need for B vitamins, as a result of which hypovitaminosis develops (which is noticeable, of course, not immediately). Our babies eat too many refined foods, getting used to swallowing food without chewing with water or other drinks – as a result, 90% of children in the 5-6th year of life have caries. 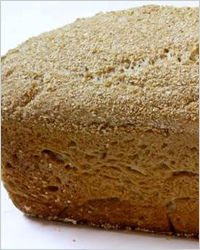 In many countries, specialized types of bread are now being produced, introducing up to 25% of bran into premium flour. There are more than 20 “healthy” varieties of bread in the world. In Russia, the producers are not so generous – as a rule, 2-3 varieties of grain bread or bread from wholemeal flour are produced, the rest of the assortment is wheat bread made from premium or first grade flour, poor in the content of nutrients and fiber.

For those who consider the passion for bran a fashionable modern trend, a small excursion into history. No one can name the exact date of the appearance of bread in the human diet, but at the same time, most scientists believe that people got the first bread more than 15,000 years ago, by accident. In search of food, ancient people paid attention to the grains of cereals. At first, they were simply harvested and eaten, then they began to grow, gradually learning how to grind grain, prepare porridge, stews and grain mash from it, and then cakes and bread. According to archaeologists, baked bread in the form of a flatbread turned out when part of the cereal talker accidentally poured onto the hot stones of the hearth and baked. For quite a long time, it was cakes that were the only type of bread, until a person discovered that a chatterbox left for a while begins to ferment, and the cakes from it turn out to be softer and fluffier. Thousands and thousands of years have passed since then, and baking bread today is a real art. But for a long time, bran bread was considered low-grade, nondescript, and more and more varieties of “beautiful” and “correct” bread appeared on store shelves …

Modern producers, fortunately, produce more and more varieties of bran bread – this is grain, malt, with raisins or special “sports”, enriched with useful substances. Unfortunately, sometimes on store shelves you can find varieties of gray bread, which are passed off as bran, but very often such bread does not contain bran, but is simply a low quality product. It is easy to distinguish real bran bread from a fake: in the context it has a gray color, the bran is visible in the form of small yellowish and light brown blotches both on the cut and on the surface. Real bran bread tastes good and has an aroma that is not found in bread made from the highest grades of flour.

People rushed to give the bran a waste status, and this is wrong. So let’s change our attitude towards this product and be healthy!